11 notes on raising money for your startup

Earlier this week I was on a panel for the Oregon Entrepreneurs Network about preparing for investment. I sat on the panel with Brad Zenger who happens to chair our Board,and Terry St. Marie, who is one of our investors (indirectly through the Oregon Angel Fund). 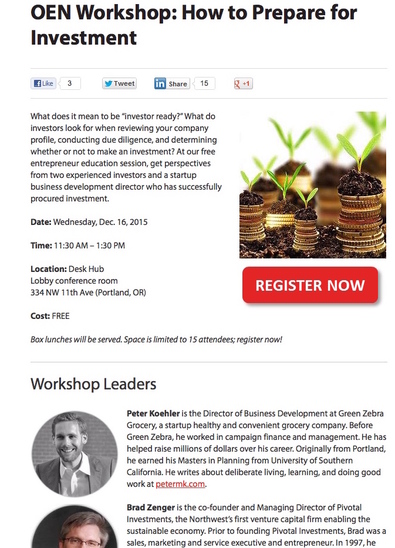 We had lunch and a conversation with 15 early stage entrepreneurs, almost all of whom were about to seek capital for the first time.

These are the 11 most important things we talked about:

1. Don't raise outside capital unless you have to.
Once you sell part of your company, it's no longer yours. Your motivations will change, even subtly, and you'll be working for three different groups - your customers, you and your team, and your investors.

Yes, investors can add accountability and value, but at the end of the day, there are other ways to get that without selling part of your company.

That being said, depending on you and your founder's personal financial situation and the type of company you have, raising outside capital is often inevitable. In which case, delay it as long as possible.

2. If you're going to raise outside capital, make sure figure out what type is best.
Don't just automatically assume that raising equity capital from private investors is the best way to go. Maybe you're a consumer facing product that just needs a small amount to launch, in which case Kickstarter might be the way to go. Or you might be eligible for a loan from an alternative lender. Do your homework.

Speaking of which type of capital to pursue...

3. Understand the evolving regulatory landscape and how it informs your strategy.
In Oregon, you can now sell equity to non-accredited investors. Nationally, you can now generally solicit your raise under regulation 506(c), meaning that you can post about it on social media or even put an ad in the New York Times. There are also other capital vehicles, such as crowd-sourced zero interest debt (see Community Sourced Capital), and alternative lending institutions (such as Craft3, who is one of our lenders at Green Zebra).

The regulatory landscape is changing fast, and innovative companies like Hatch Oregon are popping up to fulfill new opportunities. Take some time to learn the latest and consult with your counsel along the way.

4. Almost all investors have opinions, but take them for what they are,
Namely - they're not customers (unless they are). I saw the same thing when I worked in campaign finance. The people who fund campaigns generally represent a different cross section of views and opinions than A. people who vote, or B. constituents you serve. It is easy to get confused by the echo chamber of opinions in the donor class, which in reality is a vocal minority that differs from the voter and constituent class.

The same is true with investors. They will share their opinions, and they will have the CEO's ear, but unless they have some special domain-specific experience or expertise, don't get confused into thinking that their opinion is any more valid than your regular customers. In fact, it's probably less valid.

5. Have patience and remember that you can't see the corner.
Fundraising can take time. And sometimes, when it seems like you aren't gaining traction, it is easy to lose morale. Don't!

Often, right when things don't seem to be going well, you're about to turn the corner (this holds true in many other areas of life as well).

You may not be able to see the corner yet, but it's there. Of course there is a chance your company is fundamentally a poor investment, but assuming it's not, more than likely you just haven't gotten your pitch in front of the right people.

For most companies (besides the rare ones where investors clamor over each other to invest) it really is a numbers game. Keep going.

6. Before you start, figure out 3 essential questions: When? Why? How (Much)?

When should you start raising capital?
A good rule of thumb is no later than when you have 6 months of runway. Otherwise, you're in a position of weakness. If you're breaking even or profitable and have essentially unlimited runway, and want to raise for growth reasons, then you should raise when you have the systems in place to support the new capital (AKA if you got the $ tomorrow, would you be able to deploy it effectively).

Why are you raising capital?
Know your use of proceeds. Investors want to invest in things that will fuel growth (awesome new hires) rather than things that will simply fund current operations (like paying off a loan). Also, knowing the "why" helps you raise the right amount....

How much capital do you need and how are you raising it?
How much you need goes back to use of proceeds. Calculate how much you need for 12-24 months of runway depending on your situation and add at least 25% for the unknown unknowns. Everyone says don't raise a penny more or less than you need, but it's hard to forecast exactly, so err on the side of a little too much.

7. When you're pitching, know your audience.
"Investors" is not specific enough. There are many different types. On the panel, Brad had this great line, something like "When you're pitching, investors are looking for two things. The first is how they'll get make a return on their investment. The second thing is up to you to figure out."

In other words, why are they at the table? What's important to them? Some investors want to dig through every cell of your projections, others will never look at the financials and will invest if they get that warm fuzzy feeling about this special founder.

Once I was talking to a spreadsheet investor who wanted to dissect and discuss every aspect of our financials. I made the mistake of using that frame with the next potential investor I spoke to, and she couldn't care less. She told me she could review the financials herself. At the end of the meeting it became very evident that she was much more interested in learning about who our customers were, how they were different, and how we served them better than our competitors.

That was her "second thing."

8. Raise from a position of strength.
This point is a bit cliche, but desperation is unattractive. Investors are attracted to a moving train that will leave the station whether they're on it or not.

9. Be direct. Follow up. Test different communication platforms.
When Keeley was raising, she told me she had a great response rate with direct LinkedIn messages to prospective investors. Those actually worked well for me as well. But every investor is different in how they communicate, so don't be shy about experimenting with different platforms. Call, email, LinkedIn, tweet, figure out what works. '

But more important than the platform is how you communicate. I have found short, direct messages and regular follow ups are both very effective.

10. Find validators, and use them to your advantage.
With investors, you often see this herd effect. They don't want to go through all the work of doing their full due diligence on the hundreds of deals that come across their table, so they look for external validators to help them make their decision. The more validators you have the better.

Validators can include a reputable advisory board or board of directors. A lead investor is definitely one of the best validators you can get, but even a number of smaller investors is a huge help compared to nothing. We saw this with our last raise - the pace of investment accelerated rapidly after we closed with the first few investors (validators).

11. Raising money is like foreplay (in other words, start your next round now).
They say foreplay begins the minute you're done having sex. The same can be said of raising money. It begins long before the main event. Whether you've raised before or not, you should have a solid pipeline of prospects who you are communicating with regularly.

Don't have a pipeline? Make one. Track down the email address of anyone you know or have one degree of separation to who might be interested in investing, and the send them the following email:

I wanted to let you know there is a possibility that we'll be raising money in the next [6 months, 1 year, whatever].

We send out monthly updates about what's going on with the company, and I thought you would be interested in staying up to date on what's happening.

P.S. Let me know if you ever have any questions.

Most people don't want to miss out, so they'll stay on the list.

That's the easy part though - now you need to actually follow up with compelling monthly updates. But it will pay off - by the time you raise, you will be relevant, compelling, and prospects will know that you're on top of it. You'll be in a much better position thanks to all that foreplay (ht to our investor Adam for inspiring this last note).

Speaking of which, I have to go write a monthly update.

Thanks for reading - hope this was helpful.