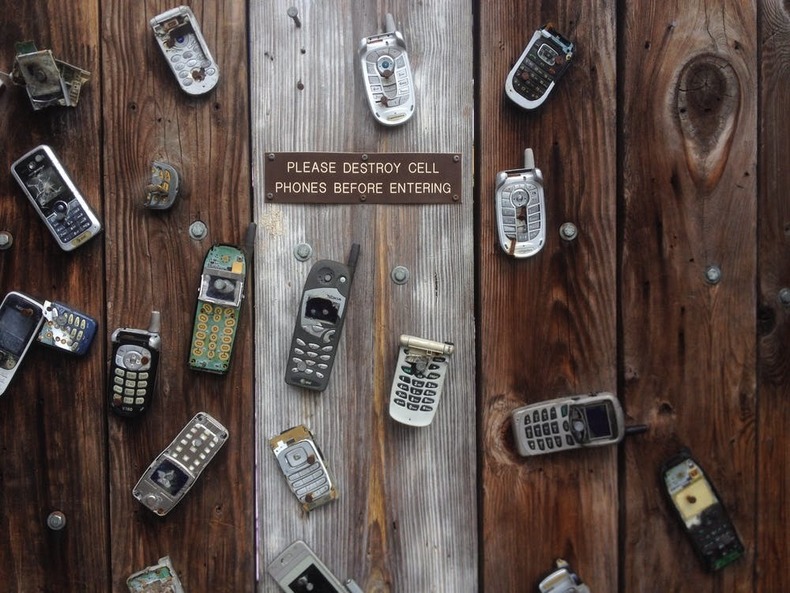 1. As a general rule, put your phone away during meals with other people. Not on the table. Out of sight, sound off.

2. For a further challenge, put your phone away during meals alone. Read, listen to a podcast, or just eat and notice your surroundings.

3. If you are expecting a truly important and time-sensitive call or text during a meal with other people, let them know as you're sitting down that you are going to leave your phone on and that you may have to attend to call or text (best to share the reason if it's not private).

4. At work - no devices during meetings, except for a designated notetaker or an explicit (stated out loud) intention to look up some important information. BE at the meeting.

5. Don't take your phone out when you're walking with someone, with an exception for a reasonable number of photos. Rule #3 applies here too.

6. Put devices on silent/airplane mode at movies and never take it out. (I think?) this is obvious.

7. If you're hanging out alone, but other people are physically around you, keep your phone on silent or vibrate (if vibrate - keep in your pocket or on a soft surface). Constant audible alerts are incredibly distracting to people around you.

8. Don't force people to watch videos you think are funny.

9. Taking photos of beautiful food is acceptable, but don't Insta that shit until later when you're alone. Take the photo, and be done with it. Then just BE with your food and the people you're with. Try to really taste each bite.

10. Don't check your phone first thing in the morning. This rule is about having good etiquette toward yourself. To help make this happen, charge your phone outside the bedroom and use a separate alarm clock. I use the Xiaomi Mi Band. It's an inexpensive ($11 at time of publishing) fitness tracker that I don't actually use for the fitness tracking, but for the vibrating wrist alarm feature. It runs 30 - 60 days  on a single charge, and it's especially great if you live with a partner. Keeley and I both wear one, and then when we wake up at different times, the person who is sleeping in later isn't disturbed. Also there is something more soothing about waking up to a vibration, compared to a loud noise.

11. No devices while driving. You only get one life dammit. People love you. Don't be stupid.

Checking blogs is a pain.

Simplify your life and subscribe today to get future posts delivered to your email.

This update link alerts you to new Silvrback admin blog posts. A green bubble beside the link indicates a new post. Click the link to the admin blog and the bubble disappears.